Showing posts from July, 2010
Show all

Parallel Computing with Python and MPI 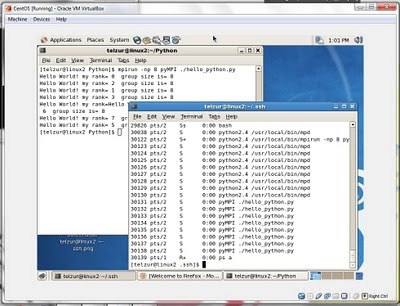 A day with my laptop

- July 03, 2010
When I came in the morning to work on my laptop I discovered that it had restarted due to some critical updates by Microsoft. One hour later iTunes opened a pop-up window and asked me to install a new version. So I allowed it. Tons of megabytes were downloaded and network became slow. Then, The AVG Anti-Virus had updated its Definition Table. I like when this happens, it gives me a good feeling that my laptop is well taken care, but then also appeared a notification about a serious patch which required a restart. OK, I confirmed that. At noon, Firefox installed a new version and requested a permission to restart as well, So I confirmed that too. Then, a few of my favorites plug-ins had stopped working because they were not compatible anymore with the new version of Firefox. Just then, without any correlation, the USB driver hung and the mouse was dead. so I gave up the mouse and continued to work with the touch pad. Then, the computer was slow. I got angry and opened the Task Manager t
1 comment
Read more
More posts