A day with my laptop

- July 03, 2010
When I came in the morning to work on my laptop I discovered that it had restarted due to some critical updates by Microsoft. One hour later iTunes opened a pop-up window and asked me to install a new version. So I allowed it. Tons of megabytes were downloaded and network became slow. Then, The AVG Anti-Virus had updated its Definition Table. I like when this happens, it gives me a good feeling that my laptop is well taken care, but then also appeared a notification about a serious patch which required a restart. OK, I confirmed that. At noon, Firefox installed a new version and requested a permission to restart as well, So I confirmed that too. Then, a few of my favorites plug-ins had stopped working because they were not compatible anymore with the new version of Firefox. Just then, without any correlation, the USB driver hung and the mouse was dead. so I gave up the mouse and continued to work with the touch pad. Then, the computer was slow. I got angry and opened the Task Manager to see what is going on. Firefox consumed 800MB and tens of other processes filled the whole memory, so I started to kill a few. My ThinkPad is full of utilities by Lenovo. Nevertheless several processes were restarted because other mysterious processes keep an eye on them. Then, explorer died. OK, I am used to that so I restarted it manually. Then, I was told that there are unused icons on my desktop. Whenever I see this message I know that something really bad is going to happen. Never follow this advice. So I ignored it. OK, now everything seemed to be stable, I went to bring coffee, but when I returned to my computer there was a Javascript error and the browser asked me if I want to wait more or to stop it. Needless to say, I didn't know what to choose so I randomly selected to kill it. Silence. Firefox was Not Responding. I thought to myself that at this point nothing could be better than to restart the machine again. So I restarted to computer. Ten more minutes were lost while it was trying to boot. Finally it came back. I happily opened Word and started to work. When I wanted to print my document nothing happened. The printer spooler had died. Finally I got the point; I need to buy a new laptop.

Popular posts from this blog

Parallel Debugging with a Serial Debugger 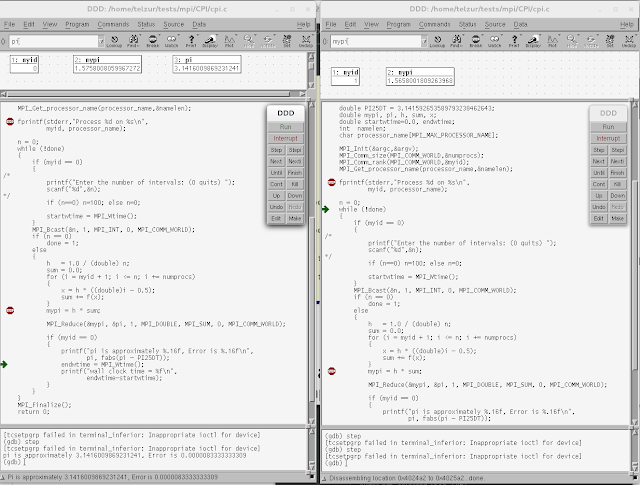 Parallel Debuggers are important tools when trying to eliminate bugs in parallel programs. Commercial parallel debuggers are expensive.
In this blog post I will show you a free and open source alternative which is good enough for education purposes and for small codes.
Suppose you want to debug the famous cpi.c code which computes an approximation to pi by a parallel numerical integration. This demo uses the free Data Display Debugger (ddd) which is based on gdb but has a nice GUI.


Finally, I enclose here a short video which I hope is convincing: 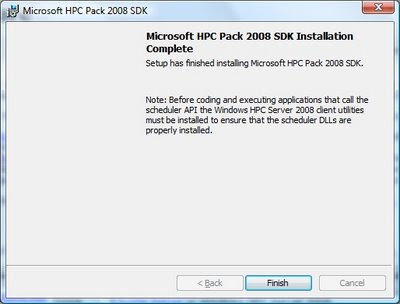 In this post I will show step by step how to install and execute MPI (Message Passing Interface) parallel programs in the .NET environment.
A much more detailed tutorial is available here.

1) Installation:
My computer is running Windows Vista and Visual Studio 2008 is already installed.
Download and install the HPC Pack 2008 (next 5 figures):


2) Test the installation from the command line (next 3 figures):


As should be, the firewall detects the communication traffic and the user should allow it:


Add Reference to the MPI component:


Execute the parallel program with 8 threads:

Verifying the execution of the 8 threads by looking at the Task Manager:


That's all for now.
Your comments are welcome.

How to extract your DN (Distinguished Name) from your certificate

- August 07, 2006
The recepie below may not be the simplest but this is what I had discovered while learning this subject

From the browser which holds your certificate make a bakup that will save it in p12 format.
If you are working under Windows, this is the right moment to FTP it to
Linux where life are easier, then proceed from you Linux computer by converting the *.p12 certificate to *.pem format:

then, extract the DN by:

in my case the result will be:

which is my DN

actually you can simply grep the string subject from usercert.pem