- April 09, 2014
Scientific Python versus Matlab: Geographical differences in interest  according to Google trends.

Do you think what I think?

Popular posts from this blog

- January 23, 2008
My post on Cellular Automata from January 12 was not put there by mistake. I want to use it as a starting point for a couple of exercises in my Parallel Processing course. In that post I gave a few drawings that differ only by the generating rule number. Today, I am going to show how using the Condor High-Throughput Computing system allows to handle in a very simple way large volume of computations. I used this simple Condor submit file : universe = vanilla executable = nks.py Error = err.$(Process) Output= out.$(Process) Log = log.$(Process) Arguments = $(Process) Queue 256 And was able to compute the whole set of 256 rules (jobs) with the same effort of computing a single rule. I submitted the task to my Personal Condor on my laptop and was not disappointed; After a while I got all the outputs happily waiting for post processing.
Read more 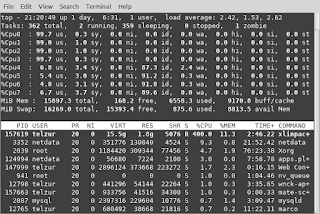